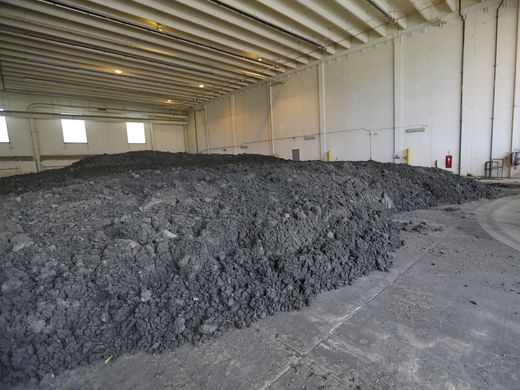 MMSD officials were pulled back into the business of making fertilizer cake after some unexpected equipment failures and repairs at the Milorganite sludge fertilizer factory on Jones Island reduced the volume of sludge that could be processed there this summer.

So sheets of moist, crumbly cake are dropping off sludge presses at the South Shore sewage treatment plant for the first time since 2010, said Khris Radke, a Veolia Water Milwaukee operations supervisor at South Shore.

Veolia Water workers use plastic scrapers to remove cake remnants clinging to nylon-covered steel plates in the presses. Each press is equipped with 151 of the 79-inch square plates. When filled with sewage sludge, the plates are compressed together to reduce water content.

Plant operators dusted off five of the steel plate presses — each is 73 feet long — and returned them to service in response to reduced production at the Milorganite fertilizer factory on Jones Island, MMSD Contract Compliance Manager Patrick Obenauf said. Half of the 12 sludge dryers used to make the fertilizer product at Jones Island have been unavailable for a few months due to scheduled repairs and the breakdowns.

The factory opened in 1994 and it is showing its age, officials said. Fully $66.5 million worth of equipment replacement and rehabilitation work is scheduled in 2016 and 2017.

Equipment inside the sludge-drying factory operates in hot and damp conditions, and is subject to abrasive dust in the process of making pellets sold in much of the U.S. and Canada as Milorganite fertilizer, Obenauf said.

Sewage sludge is continually pulled out of treatment tanks at both Jones Island and South Shore to make room for more wastewater to come through the process.

The decision was made to start up the presses to produce cake and free up storage space for more sludge, he said. Presses started operating Sept. 26 and will run until the tanks are empty or more dryers are operating at the fertilizer factory.

Tons of the crumbly cake are being stored in hangar-like buildings at South Shore until it can be spread on area farm fields as a fertilizer, or shipped to a landfill for costly disposal if enough acres can't be found.

About 50 tons of sludge a day — mostly bacteria and other microbes used in the treatment process to eat organic waste — is being pumped from South Shore to Jones Island for Milorganite production.

Another 60 tons of sludge a day from an earlier step in the treatment process — comprised of microbes and organic waste — is routinely pumped into closed tanks where bacteria can digest the sewage solids. As they eat the meal, the bacteria release methane gas that is stored in above-ground tanks and burned to generate electricity.

The volume of digester sludge is reduced by half while in the tanks. It is this portion of South Shore sludge that has been diverted from Jones Island to storage tanks and will be pressed to make cake.