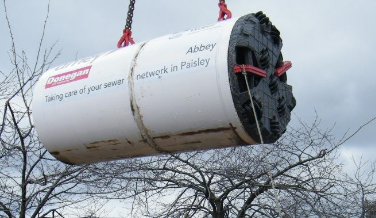 A state-of-the-art machine which will construct a key part of a one mile-long waste water tunnel, or sewer, under the streets of Paisley has been launched by Scottish Water.

The two parts of the Microtunnel Boring Machine (MTBM) were lowered into a shaft by a giant crane in Bladda Lane, Paisley on Monday and the machine has been assembled below ground and started construction of the tunnel. 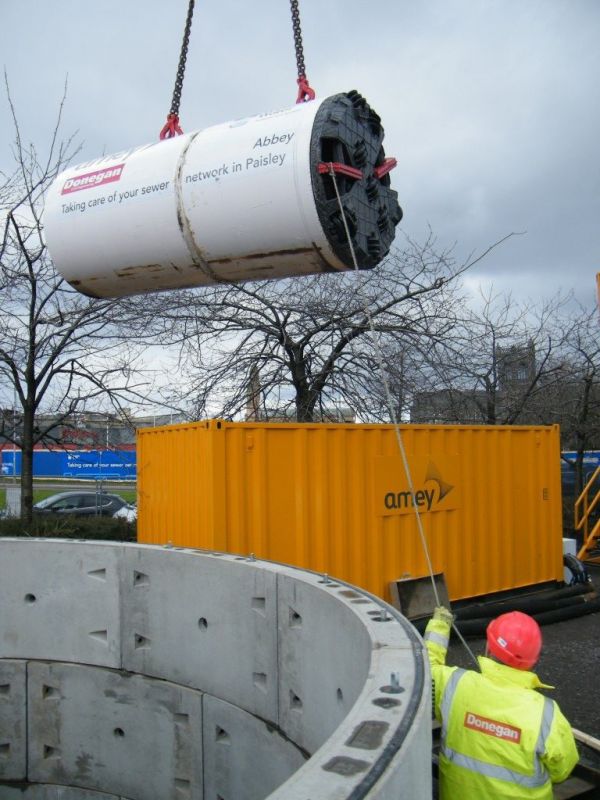 Contractors Amey, working for Scottish Water, will construct a large diameter interceptor sewer which will start at Bridge Street car park and go across the Watermill Hotel car park and Lonend before going along Saucel Street, beneath Saucelhill Park and the railway line near Canal Street Station, Espedair Street, Rowan Street and Kilncroft Lane/Neilston Road.

The tunnel will form the major part of the £17m Scottish Water project which will improve the water quality and natural environment in two local rivers.

Mr Brian Boland, the project manager, said: “We are delighted to have reached this milestone on the project, after a lot of preparatory work, and to have lowered the tunnel boring machine onto position at the launch chamber.

“Once it was assembled below ground, the machine was presented to the rock face and has now started its work on boring through the earth and installing the pipe. After four years of planning this project, in liaison with the Scottish Environment Protection Agency (SEPA) and Renfrewshire Council, it is great that the tunnelling proper is now under way.”

The machine, which was launched at one of the 15 shafts along the tunnel route, is about seven metres long and weighs about 12 tonnes. 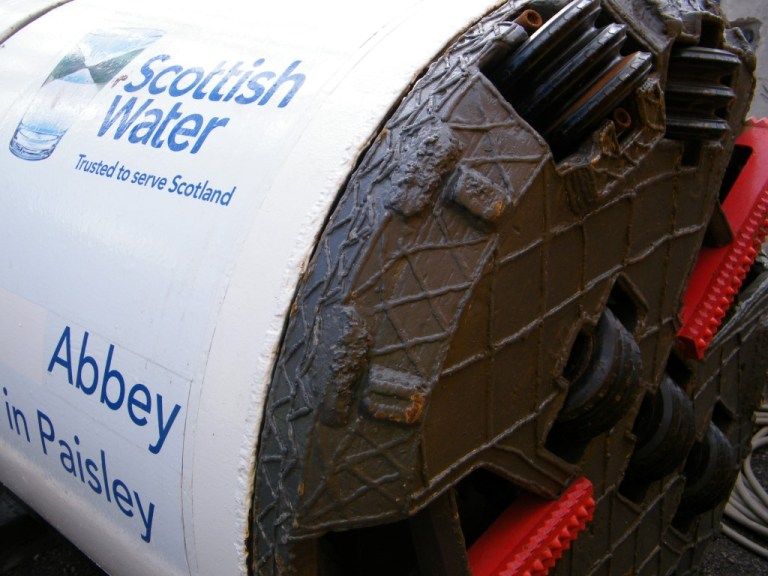 Powered by an external hydraulic power pack, the first MTBM will operate at about eight linear metres per day, removing about 45 to 50 tonnes of earth per day.
The tunnel will be installed by the pipe jacking method, with individual sections of concrete pipe installed sequentially and jacked into position to the rear of the MTBM once the machine has removed the soil. It will be installed mainly in mudstone and siltstone.

The machine, which was given a woman’s name, Abbey, in accordance with tunnelling tradition, will be operated remotely from a control centre above the launch shaft.

The new stretch of sewer will have a diameter of up to 1.5 metres and will be installed at depths of between 4m and 20m.
The project, which includes the installation of Combined Sewer Overflows (CSOs) in the town centre,will substantially reduce the frequency of spills from the sewer network into the Espedair Burn and White Cart Water in storm conditions.

The investment, which is the biggest of its kind Scottish Water has ever made in Renfrewshire, is part of the company’s £250m, five-year programme of work, launched in 2013, to improve river water quality and the natural environment and tackle flooding across the Greater Glasgow area.

The overall investment, which includes the Shieldhall Tunnel in south west Glasgow, is the biggest in the Greater Glasgow area’s waste water infrastructure in more than a century.