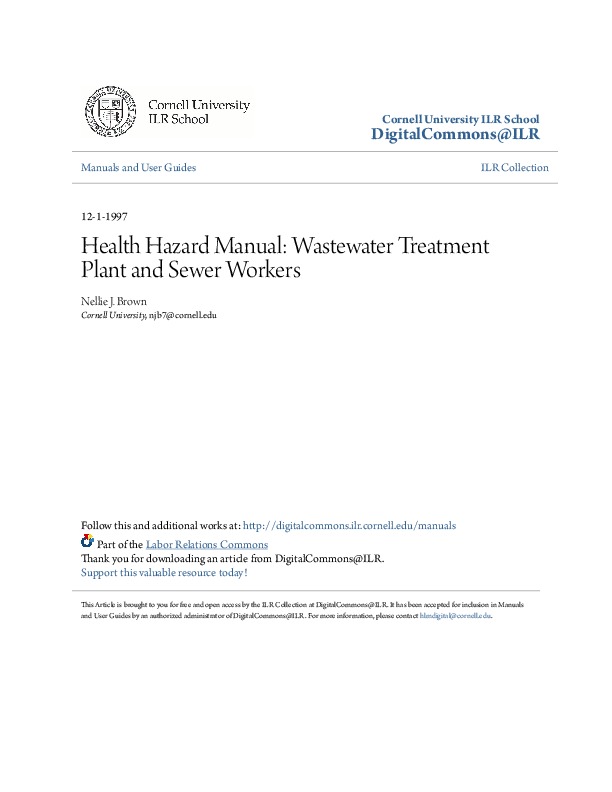 Sewage is the used water of a community and can include domestic wastewater and industrial wastewater. Combined sewer systems will include storm water such as road runoff which carries oils, salts, metals, and asbestos. Many systems, especially older ones, will receive infiltration which can carry pesticides and herbicides from soil application. For many years, work in the wastewater treatment field was considered the most hazardous, especially due to deaths involving confined space entry. This field is considered somewhat less hazardous today, but treatment plant workers still do experience health problems and deaths. These experiences occur in specific incidents involving chemicals in the sewer system and in regular work exposures throughout the plant and its processes. Some chemically-related health complaints are acute in nature, involving short-term exposures and complaints such as irritations of the eyes, nose or throat. Other problems are chronic in which repeated exposures, sometimes over several years, have caused effects upon internal organs or have involved occupationally-related allergies. Studies have shown that wastewater treatment may generate aerosols containing microbiological and chemical constituents. In fact, the primary route of exposure for workers is probably inhalation. The physical layouts of many sewage treatment plants involve open tanks and basins; plants typically are not designed to prevent aerial dispersion of wastewater during the treatment process. Volatile organics in wastewater may be vaporized or air-stripped during treatment. Many of the compounds are carcinogens and/or mutagens, so sewage workers may be at increased risk of cancer or adverse birth outcomes. Infections from exposure to waterborne disease organisms may be subclinical or may appear as actual disease in wastewater workers. Treatment personnel have reported nausea, vomiting, indigestion, diarrhea, and flu-like complaints. Studies of antibodies in the blood of workers have documented that disease exposures have occurred. Although several years of exposure tends to produce eventual immunity for many workers to some organisms, new workers tend to be ill more often than experienced workers. This manual examines how exposure occurs during the treatment processes; ways to reduce exposure by engineering controls, administrative controls, process control strategies, and protective equipment; and some suggested medical surveillance. A single sewage treatment plant may service a hundred or more industries; therefore an enormous range of chemicals may be present in the influent and sludges. The presence of toxic chemicals and organisms in sewage, in sludge, and in the air at specific sites in sewage plants has raised suspicion regarding their possible effects on the health of the workers in these plants. Wastewater treatment plant workers may be exposed to chemicals or organisms by direct contact with wastewater and sludges, or by inhalation of gases, particles, aerosols, vapors, or droplets. These hazards may enter the plant in soluble form or attached to suspended solids. Compounds reported from sludge analyses include chlorinated organic solvents and pesticides, PCBs, polycyclic aromatics, petroleum hydrocarbons, flame retardants, nitrosamines, heavy metals, asbestos, dioxins, and radioactive materials. The concentration of organics and metals in sludge is indicative of the areas' industries; for example, high concentrations of PCBs in Schenectady, NY, sludge was due to the manufacture of electrical equipment upstream from the treatment plant. There are also derivatives of chemicals formed by microbiological or other processes during the sewage treatment process; these may be more or less toxic than the original compound. Disease-causing organisms have been found in sewage sludge; therefore, sewage workers may be at increased risk of infection or diseases.